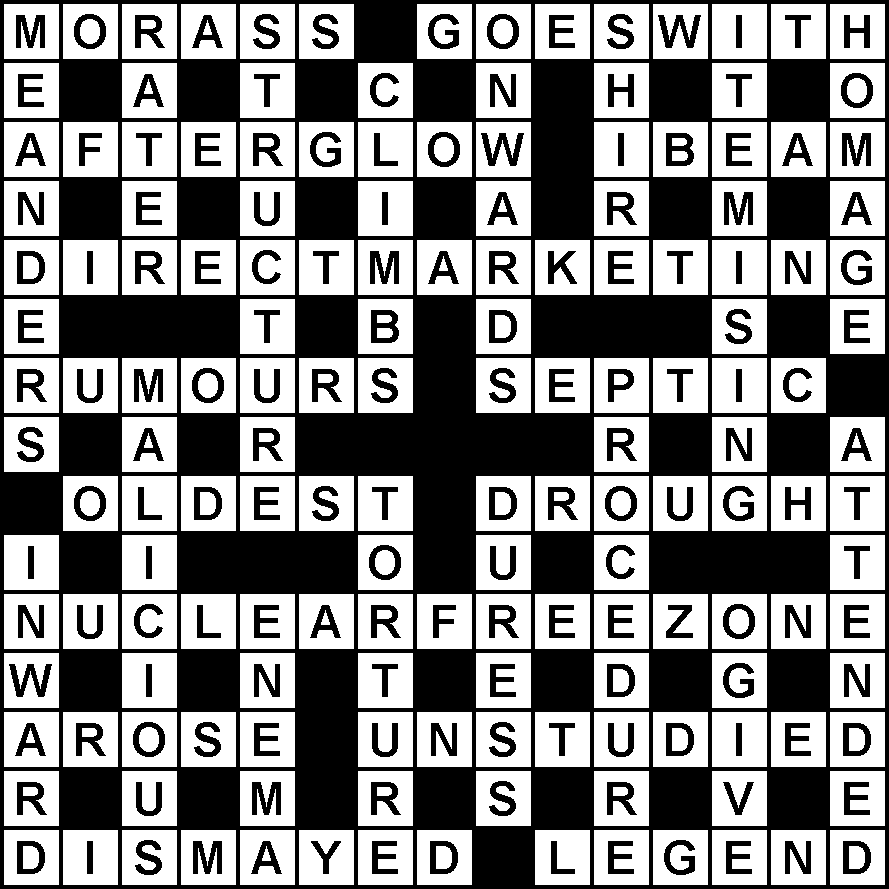 In 2006 the Macquarie Dictionary people asked me to consult on their Macquarie Crossword Dictionary that hadn’t been updated since the first edition in 1990. With just about everything stored on computers, there was a real opportunity to create a tailor-made crossword dictionary, one that could take advantage of modern technology that categorises words, links words, sorts words etc all at the touch of a publisher’s button. As a heavy daily user of such works, both in book form and on the computer, I believed I had the knowledge to specify the best formula for such a book. Building on the design used by Macquarie to structure similar books like its thesaurus (that involves the categorising of words and heavy cross-referencing), we included encyclopedic entries and sorted alphabetically within length, that is, a solver could go to a list of words of the length they want in the appropriate word grouping/meaning. I also wrote an introduction. It’s a well-put-together book and still available.
In 2012 I came across a blog entry by Australian, Denise Sutherland, informing the world of her latest project, Solving Cryptic Crosswords For Dummies. I emailed Denise offering assistance as there was also an accompanying book of puzzles and I thought she might need some help. After an initial polite “no thanks”, she came back with an offer (through John Wiley & Sons Inc, the publishers of the Dummies books) of the technical editor position for the first book only, which I quickly accepted. Traditionally the technical editor comes in after the book is written to basically to make sure the content is factual and that concepts are expressed correctly and clearly, but in this case, due to time constraints, I worked fairly closely with Denise on a chapter by chapter basis and contributed to the overall structure of the book. Dummies books are formulaic and the publishers put heavy constraints on authors which don’t always suit the subject matter at hand or the structure of the learning process that’s needed to impart the knowledge. As each chapter had to stand on its own two feet, a progressive approach that builds on previous chapters was difficult to achieve. Despite this, Denise did a good job getting the message across and the book is still available.
December 2013 saw the 100 year anniversary of the first published crossword. In the lead-up to the big event, a number of crossword setters wrote books detailing the history of the crossword. One such setter was John Halpern, a.k.a. Paul from The Guardian, Punk and Mudd. He contacted me earlier that year asking for information regarding the history of Australian crosswords (all types) to include in his book. He supplied a comprehensive survey of sorts that tried to cover a large range of crossword areas specifically aimed at the scene in Australia. These days much can be found online but old-fashioned research is still needed to unlock those nuggets that have so far escaped the digital claw. There’s a wealth of data in the National Library of Australia’s Trove (a repository of digitised publications), but due to the scanning software and computer translation, not everything is indexed properly or searchable. There are lots of newspapers included, but some notable omissions. However, all newspapers are available on film up to the early 1950s (the restriction is related to copyright laws) – you just have to go to the State Library of NSW and go through them by hand. For John’s project I looked through 100s of rolls of film looking for when particular newspapers started their crossword, when it went from weekly to daily, and when their first cryptic was introduced. I found crossword stories, crossword competitions, holiday crosswords and much more. All this info went to John but too late apparently to warrant anything more than a few lines in his book, The Centenary of the Crossword: The Story of the World’s Most Popular Puzzle which can be found here.
My last book involvement was a lot simpler : I was asked by the great UK setter, Don Manley, to supply a Stickler for the new edition of his (cryptic) crossword book classic, The Chambers Crossword Manual. I had met Don the year before when he visited Australia with his wife and spent quite a bit of time talking about crosswords.
I’m not sure if that will be my last inclusion in a book about cryptics, but it’s likely as my limited exposure these days doesn’t do much for my credibility or standing within the cryptic crossword community.

One Response to The Stickler Weekly 96 Solution